Skip to content
Home > Can Shock Collars Cause Brain Damage? 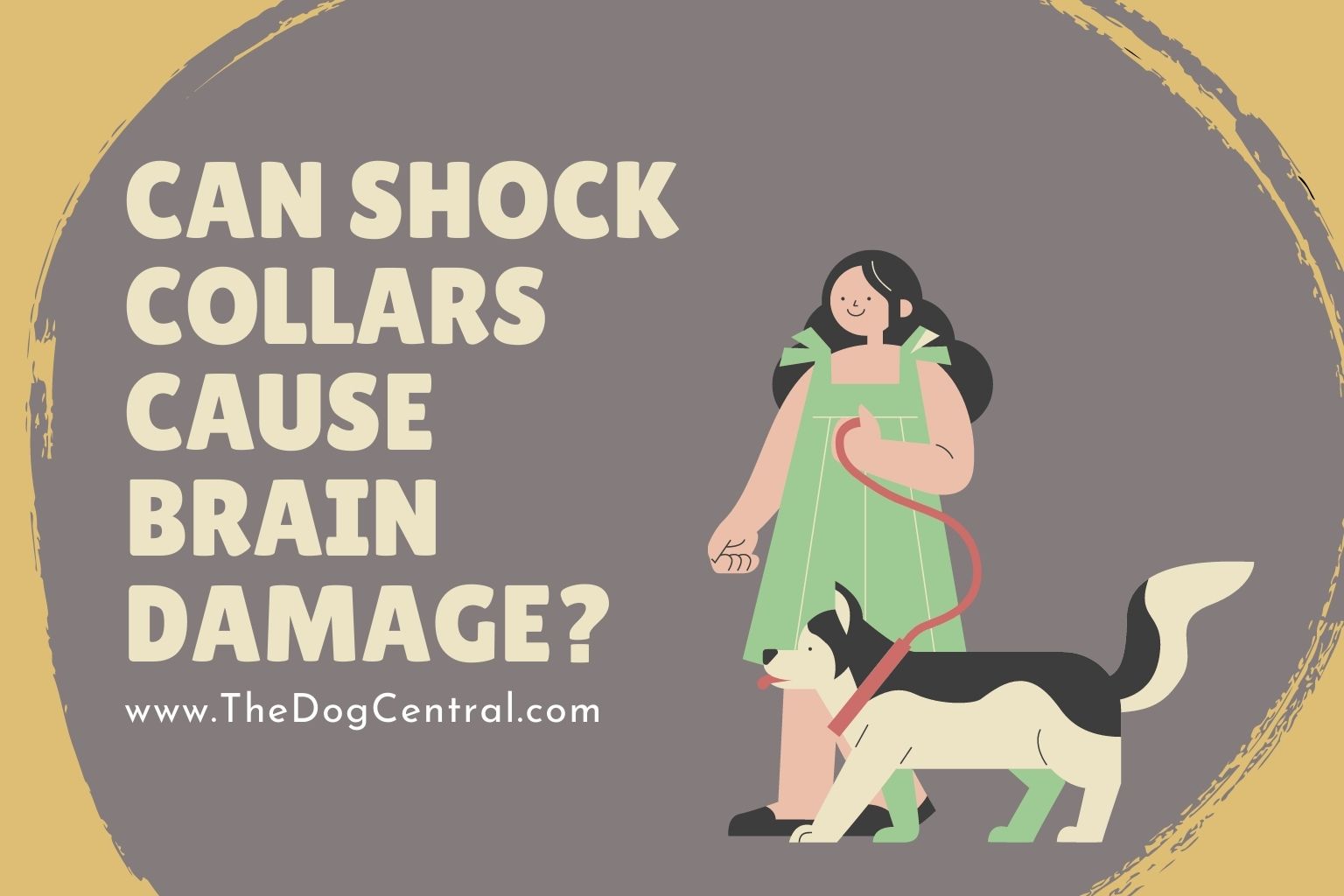 In the training context, the sessions are aided by the use of multiple tools such as dog collars, leashes, dog harnesses, crates, and clickers. These tools are specifically synthesized for dog training based on the dog’s type.

To train pets, one of the tools is collars. As the individual animals vary, the dogs also vary from one another. So these collars are made and used by taking into account the type of dog.

One type of collar is a shock collar. These collars are used to train pet dogs by giving mild electrostatic shocks.

A shock collar is like a normal dog collar but has a metal wire in it, which is used to give a mild electric shock to the dog. The shock collars are also called electric collars, e collars, and remote collars.

The shock intensity is adjustable. These shock collars are remote-controlled. The dog trainer or owner holds the signal transmitter.

The shock collar is fitted so tightly around the dog’s neck. This is because only the skin can sense that mild shock of bark collars.

How Are Shock Collars Used?

In the training course on dog by shock collars, a collar having a metal wire is worn around the dog’s neck. A transmitter or remote control, held in the hands of the trainer, transmits signals that give mild shock felt by the dog on his neck.

These shock collars are easy to use from a long distance. First, when the trainer sees an unbearable or unnecessary behavior shown by the dog, the pet dog gets a gentle shock. Then, whenever the dog tries to display the same behavior, his mind signals to him about the previous shock. In this, the dog stays away from practicing the unwanted behavior.

Why Are Shock Collars Used?

Some trainers use a shock collar to give punishments to the dogs.

Dog shock collars can cause trouble to dogs if used unnecessarily and unlimitedly. For example, if a human wears a shock collar and is subjected to severe electrostatic shock, this damages his skin. In the same way, when given to dogs excessively by shock collars, these electric shocks cause brain damage, psychological distress, displaced aggression, skin damage, and painful burns to the dog’s skin.

Unchecked and unregulated use of these shock collars or other spray collars implements huge traumatizing effects on dogs. If the quality of shock collars is low, this adds fuel to the fire. Low-quality, tight-fitting shock collars inflict pain on the dog, and the dog barks in response to that.

The remote control electronic shock collars put strains on the skin if worn so tightly. Even these can create a sense of suffocation. In response to this sense, the dog tries to remove it. Unfortunately, to remove the shock collar, the dog always hurts himself. The dog’s neck then starts to bleed.

Can Shock Collars Cause Painful Burns?

Shock collars can cause painful burns to the dog’s skin. This is because the skin ruptures due to frequent shock collars or e collars. Painful burn is a major shock collar side effect inflicted on the dog.

Every dog has a different skin that is differently sensitive to electric shocks. The more sensitive the dog’s skin, the more the dog is prone to burns by even minor aversive stimuli received.

Can Shock Collars Cause Brain Damage?

Shock collars are good when used properly. However, if the same dog shock collars are used excessively, the shocks will lead to brain damage. Can shock collars cause brain damage is a very often asked question by pet owners? Unfortunately, instead of giving a positive response to the owner, the pet dog starts behaving aggressively if he is subjected to more than enough shock.

Some dog trainers give punishments to the dogs by using these electronic collars. Multiple shocks put a strain on the dog’s body.

The electrostatic shock does not affect the brain directly but can lead to multiple brain problems such as;

When the dog trainer gives electric shocks of higher intensity, these indirectly generate aggression in the dogs. As a result, the pet dog tries to escape from the electric shocks and becomes aggressive toward the dog owner or trainer. This generated aggressive behavior causes severe effects, and the pet dog becomes unfriendly with the owner, with the trainer, or with other dogs.

A shock collar can become the cause of unhidden fear in the dogs. Whenever the dog sees a shock collar, it reminds him of the pain thresholds he used to feel. Also, the dog starts losing a feeling of affection for the owner.

The dog owners use a shock collar to suppress dogs’ unwanted behavior and set the desirable behavior. Excess use of a shock collar may lead to a counter situation.

Shock collars hurt the dogs and produce psychological distress in them. In addition, when repeated shocks are given, the dog becomes sensitive, increasing the probability of depression in the dog.

Some prong collars do have adverse effects on the brain of dogs indirectly. Not only do these prong collars cause brain damage, but they also leave physical marks on the body. The physical pain due to these marks increases the psychological stress in the dogs.

No doubt, when sudden unexpected shock occurs to the dog more than enough, this gives rise to severe anxiety. Many dogs can bear the shocks up to a maximum range and show low sensitivity. But some dogs are more sensitive to repeated shocks. This sensitivity makes them more anxious and depressed.

Vets do not recommend using dog shock collars. They think the use of these shock collars comes in the sense of punishment to dogs, and it is against the animal welfare act.

Vets and other animal organizations prohibit the usage e collars, shock collars, and other choke collars not only for the dog but for other animals too.

They lay stress on the kind of reactions shown by the dogs when they are continuously subjected to some kind of shock stress. The dog shock collars can induce more aggressive behavior in pet dogs as a reaction to rigorous shock.

Most pet dog owners ask whether the shock collars are bad or not. However, the use of everything is effective to a limit. If the limit is breached, that effective thing, without any doubt, turns into the worst one.

In the same way, shock collars induce an aversive stimulus in the pet dog if the dog is repeatedly exposed to severe shocks. As a result, pet dogs might damage themselves and show more aggression leading to abnormal functioning of the dog’s heart.

Punishments to pet dogs by these shock collars are one of the aversive methods that work against the animal welfare act.

Shock collars are used to train the dogs in their best behaviors. As a result, the dogs can easily adapt and learn different behaviors. These collars are mostly used for negative reinforcement during the training course.

These remote collars are good to train the dogs when used in a controlled way. However, the intensity of the shock is adjustable, and the dog must be given a low-intensity shock because one dog can bear a specific level of stimulus and the other cannot.

When the remote collars are used extensively and excessively, the shock imposes severe effects on the physical and mental health of the pet dog.

The shocks can cause brain damage to the dog if these shocks are given at very high intensity for prolonged durations.

Instead of getting the dog trained, these shocks can counter-attack the health of the dog by subjecting the dog to intense depression. In addition, pet dogs bear stress and anxiety for longer periods after receiving aversive shock stimuli—also, the psychological distress increases.

The accurate use of these collars can reduce all these negative effects of remote collars.