Skip to content
Home > When Can Puppies Wear Shock Collars? 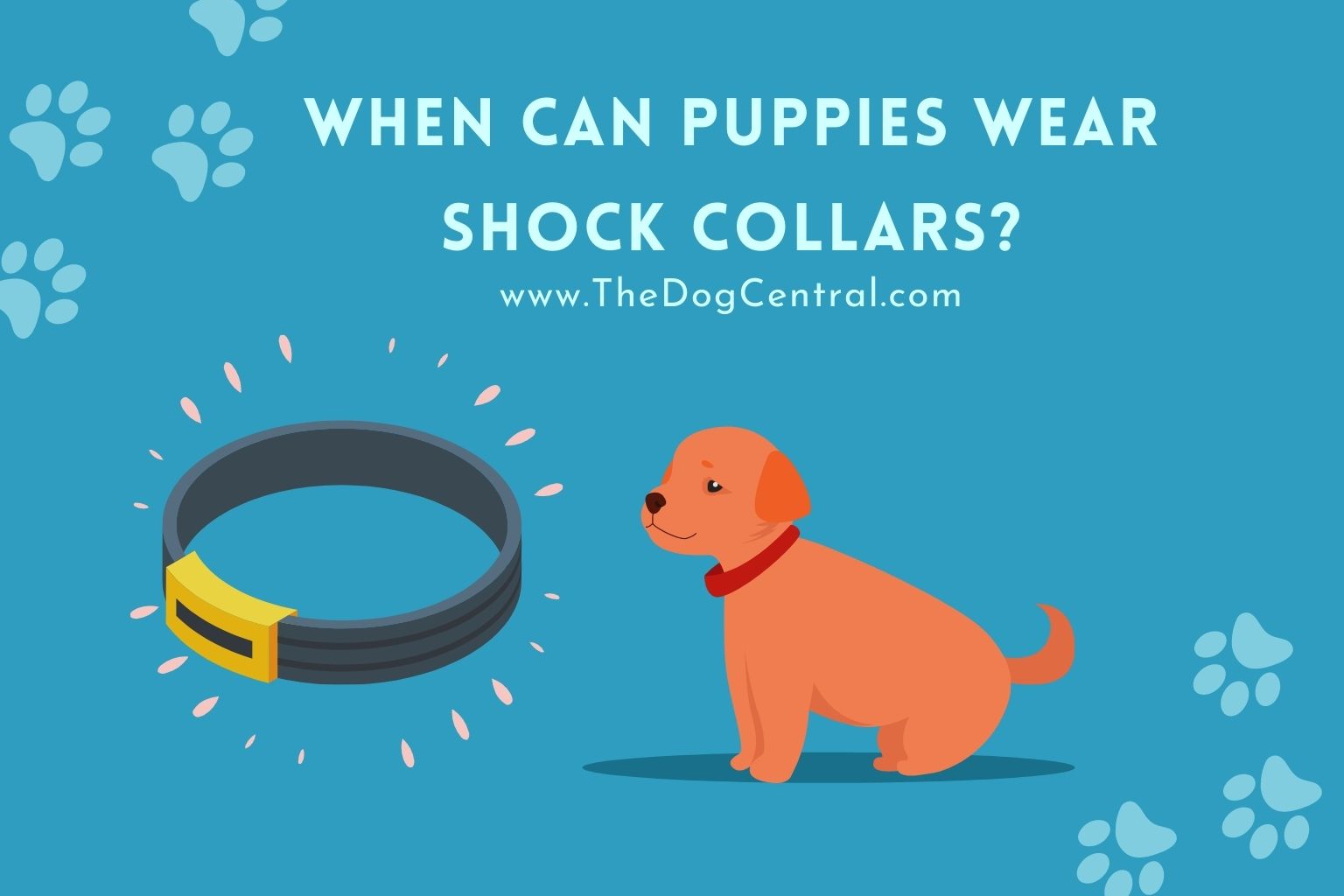 Shock collars have been a controversial topic among dog owners for many years. Proponents of these collars argue that they are safe since they use static shocks that produce a mild tickling sensation rather than a painful electric shock. They consider these an effective way to control self-rewarding behaviors in dogs. They also support their claim by saying these cause less harm than other mechanical training collars like choke chains or prong collars.

Opponents of these collars indicate the dangers of improper or abusive use of shock collars and describe the urge to use electric training collars without contemplating alternative reward-based training methods. Apart from all this controversy, some pet owners often ask whether shock collars are safe for their puppies and by when they can train their puppies by using shock collars.

Appropriate Age to Use a Shock Collar

Some dog breeds are more sensitive to pain and shock than others. Your puppy can be trained through a shock collar at an earlier age if he is a Siberian Husky or a German Shepherd. On average, shock collars should be used when puppies reach 10 weeks of their age. The Breeding Business has suggested the same age on their web page. But, training with E-collars at such a young age requires proper care and consideration. A puppy shock collar must not be intended as a punishment. Instead, the purpose behind its use should only be to discourage bad behavior in your little pup. This training device will help your puppy learn how not to chew things around, wander purposelessly, or react aggressively in front of food. The shock should be gentle enough not to feel painful, but it should just mark the unwanted behaviors of the puppy and correct them through mild stimulation. The intensity of the shock should be managed properly to keep the pup alert instead of harming him.

Can You Train Your Puppy With a Shock Collar?

Yes, one should train the puppies with shock collars. But it would be difficult to train the puppy directly with a shock collar. Make sure he has already learned some of the basic manners and commands like “sit,” “stand,” “come,” or “stay.” You can then use a shock collar to help the puppy develop the habit of these commands. This process is also called collar conditioning. The reason behind it is that a new puppy might not be used to collars at all. Introducing a shock collar can disturb his learning curve and make him to go into emotional stress. Moreover, many trainers don’t use the collars the right way. Misusing the shock collars can put the dog at risk of several health hazards.

The Best Way to Introduce Shock Collars to Puppies

Before you begin training with the shock collars, you must know how to introduce the shock collar to the puppy. The collar has a built-in controller for setting the stimulation level. One can set it according to the dog’s mental endurance. Start with the lowest level. If the dog responds to it, there’s no need to increase the stimulation level further. But if the dog seems to be unaffected by it, increase the level a bit. In this way, gradually increase it to meet the dog’s temperament.

If the shock collars are not introduced to puppies in this way, their physical and mental health is at stake. Physically, if the collar is too tight, it can cause painful burns on the dog’s skin due to frequent shocks. Mentally, the puppy is not prepared for such training; introducing a shock at high stimulation levels can induce fear-based aggressive behavior. The puppy will trust you less and be afraid of the shock collars. It can also put him in an anxious state.

How to Train Your Puppy With a Shock Collar?

Training a puppy with an E-collar is needed to help him reinforce already known behaviors, learn better manners and reduce aggressive behaviors which may harm the dog himself or others in the home. But, you must know some rules before you start E-collar training of your puppy. First of all, you should opt for the positive reinforcement method of puppy training out of the different training methods. Every time the puppy learns certain behaviors, reward him with a treat or a pat. If your puppy is relatively dormant, help him experience some positive adventures so that he can learn from them.

There are also some anti-bark collars available to control excessive barking in puppies. These must be operated at safe levels as they will emit electrostatic shock automatically whenever the puppy starts barking. Since the puppies are new to such devices, first introducing them to a training collar is really important. You must observe all the E-collar conditioning protocols while introducing them to your pup. Start training by keeping the sessions short.

Using a shock collar can provide the dog with a learning opportunity to walk off-leash. You can let the dog run away from you with the leash (transmitter) still in your hand. If it seems the dog has crossed the boundary, you can just press the button, give the electrostatic shock, and provide a quick fix to the dog by calling him back. Off-leash training gives the dog a sense of freedom. Canines want freedom too. It can help the dog trust you more. One may wonder how I can reinforce the off leash-training using a shock collar. No worries, you can use verbal markers to encourage the dog.

No Effect on Your Bond

E-collar training is good for both you and your puppy in the sense that it will never ruin your bonding. Even if the dog seems to dislike the collar, he will never know the person behind the whole manipulation. During the training sessions, you can easily hide the transmitter in your hand while giving the dog a little shock. The dog will look at you but will never know you are the one giving him shocks.

Training dogs to control aggressive behaviors or abandon other undesired behaviors is quite time-consuming. If you are not training the dog just because the training time frame is giving you goosebumps, you definitely need to opt for shock collars. The time needed to train the dog through traditional dog training methods can be reduced to a great extent with the help of the shock collar. Haven’t you seen dog training academies advertising saying that we train in short periods of time? They are using the same tools.

The reasons why some experts don’t consider the shock collars safe for puppy training are:

Harms to the Puppy

If you frequently use an aversion-training method that involves pain, fear, and anger, it can be difficult to prevent your dog from the harm caused by it. Electrostatic shocks can be hurting for puppies and can create fear, stress, and anxiety in them. Sometimes, using a dog shock collar can cause the dog to suffer physical pain and injury. The dog’s neck is especially susceptible to injury. In addition, the shock may result in a rapid increase in blood pressure, thus affecting the dog’s heart and eyes.

A Temporary Method of Training

Although using a puppy shock collar may produce immediate responses in dogs, the effect of such type of behavioral training is generally short-lived. Following some time has passed after the practice sessions, the dog begins to regress toward the undesired behaviors again. However, the basic concepts he has learned through positive reinforcement may remain intact.

Sometimes, the collar on a puppy may begin to malfunction. It will lead to the repeated stimulation of the puppy through shock. Young puppies may not be able to endure it as it leads to unhealthy increases of stress hormones like cortisol and adrenaline. The radical solution to this problem can be in the form of “auto-protection mode” found in some collars.

Proper Training Can Eliminate the Need for a Shock Collar

As compared to older dogs, puppies will develop learning curves more quickly. While his fellow dog will be still learning, the puppy may have mastered all the fundamentals of good behavior that an animal must follow to adapt to his environment. By applying different types or tactics of teaching, such as positive reinforcement or reward-based training instead of negative reinforcement, the puppy will learn rapidly without needing a dog collar.

Usually, dog parents don’t give their dogs consistent and effective training through these methods and instead use shock collars. No doubt, it will reduce unwanted behavior in them, but there are chances of it returning. Although radical solutions may be suggested for an adult dog who demonstrates consistent poor behavior and requires urgent restoration, mild training tactics are preferred for a puppy.

If used correctly, a dog shock collar is safe for a puppy. However, it should not be used on puppies younger than 10 weeks. The puppies should be taught basic commands without using a training collar. After the initial training, a dog shock collar should be used to reinforce the basic behaviors through conditioning. A young dog understands training commands more rapidly than an older dog.