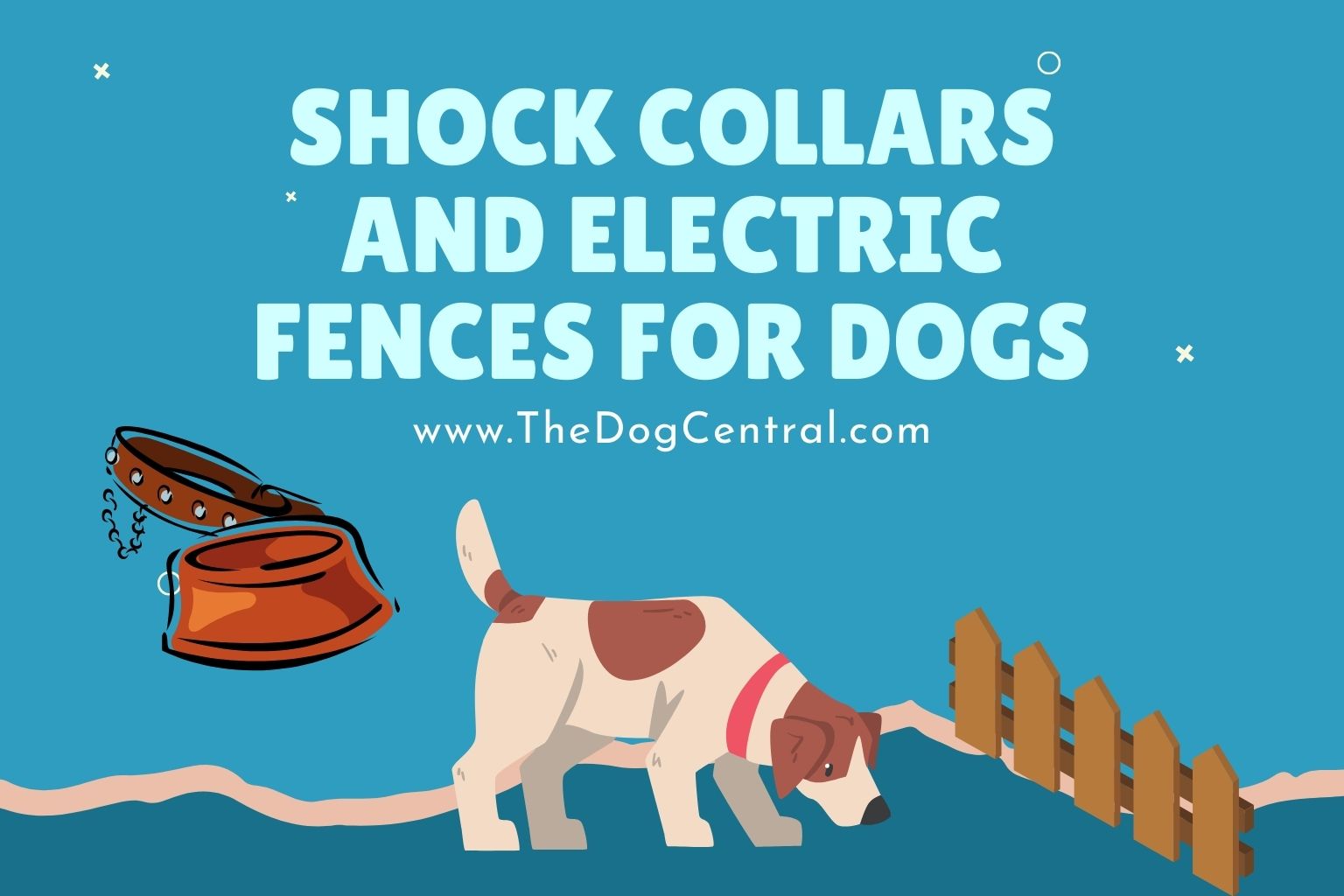 Some dogs bark so unnecessarily or without any need. As a result, they develop a behavior of excessive barking. This unnecessary barking can be repressed by training the pet. This repression involves the negative reinforcement of behavior.

When you leave the pet in the yard, it may play, run or jump there. Sometimes it crosses the boundary of the yard and gets away from sight. To prevent it from any harm and danger, you have to put a dog fence around the yard’s boundary. Also, you need to teach the dog not to jump over or cross the boundary. This is also done by giving him some training sessions which involve positive reinforcement.

A shock collar is a kind of collar used for dog training. This gives a shock stimulus to the dog, which is sensed by the pet as a slight tickling effect.

Shock collars have a metallic device fitted within them. This device produces electric signals that the dog feels at his neck.

The shock is not like a real-time severe shock felt after touching a live current wire. No, it is not like that. The shock is just the same tickling effect that anybody can feel while combing the hair when charges are produced after rubbing the comb against the hair. The dog achieves this same effect after getting the shock.

An electric shock collar teaches multiple dogs about the behavior during dog training. Negative reinforcement is the mode of training involved during this kind of dog training with electronic collars. First, whenever the dog shows unwanted behavior, the dog owner or trainer gives a mild shock to the dog. Then, after exhibiting sane behavior, the dog learns not to show this behavior again by getting the same shock.

This dog’s unwanted behavior can be extreme barking, shrieking, or running from the yard crossing the dog fence. The trainer suppresses such behaviors of dogs to make them better for living in a good way.

How Are Shock Collars Used to Train the Dog?

An electric remote dog training collar is easy to use not only by the trainer but also by an owner if he knows how to use it. The collar has metallic wire fitted to it, and the dog wears it. This metallic wire, which can generate electric shock, is connected with a signal transmitter. The dog owner or trainer holds this control. When he sees the dog showing unwanted and needless behavior, signals are transmitted to the collar from the transmitter control. Then the collar generates static correction, which the dog on his skin feels.

After experiencing the same static effect over the absurd behavior instead of any reward, the dog learns to forget this behavior. The dog might stop barking unnecessarily, or he may not cross the fence line again.

What Are the Pros of Shock Collar?

Using a shock collar in an optimum way will give better and expected results in training sessions. When the dog is made to learn from slight shocks, and each session does not go so long, they easily learn to quit bad behaviors. For example, on getting static correction on showing the absurd behavior, the dog does not go for showing this behavior anymore. Instead, he will remind himself of the previous shock stimulus; he does not express unwanted behavior.

The shock collar falls in the reasonable range of price. These collars are available at multiple prices and in multiple designs. The owner can easily choose a good shock that is not burdening his wallet and is good to train the dog.

As this collar has adjustable systems and features, the trainer can adjust the shock intensity easily without any worry. This shock adjustment can be made according to the dog’s skin, age, or sensitivity.

What Are the Cones of a Shock Collar?

When an inexperienced person uses a shock collar for his pet, he welcomes so many problems for his innocent pup. Even when the shock collars are used for negative intentions and purposes, the results will be damaging.

When the shock of severe intensity is used on the dog, he is likely to go into depression. Multiple and unnecessary shocks can damage the normal functioning of a dog’s brain leading to psychological problems. As a result, the pup feels stress and anxiety. Also, these psychological problems lead to the loneliness felt by the dog. The dog starts staying away from the owner. This ultimately leads the dog into separation anxiety too.

When the dogs bark excessively, they get shocks again and again. These multiple-time shocks damage the skin of the dog. These wrong static shocks cause burns on the sensitive skin of the dog.

The shocks cause external physical pain. The normal functioning of the dog’s body also goes into the disturbance. Rigorous electrostatic shocks put a strain on the heart’s functioning. The affected heart functioning also creates inconveniences in the dog’s respiratory tract and gastrointestinal tract.

The absolute problem confronted by the dog is fear. If your dog is sensitive, then the shock collars do more harm than good to the dog. Receiving the same shocks again will create a fearful sensation in the dog. The dog starts to fear the owner and hates him instead of changing his unwanted behavior. Also, the shock collar training involves the negative reinforcement model. The repression of behavior may bring unresistant modifications in the pet’s nature.

Do Shock Collars Cause Harm?

Shock collars can cause harm only when used with negative intentions or severely. When shocks of very high intensity are given to the pet, these inflict severe physical pain, burns, and damage to the skin. Not only this, but mental faculties are also affected. The dog becomes more fearful and aggressive. The dog might run from the home.

Some owners use shock collars for only the sole purpose of giving punishments to the dog. When punishments are given instead of teaching a dog correctly, it will, beyond doubt, bring harm to the dog. Also, the involvement of negative reinforcement has a great impact on the dogs.

A veterinarian never recommends using a shock collar for training a dog. The shock collar is always the last resort tool for dog training for very stubborn and aggressive dogs. Vets say that using shock collars for dogs, cats, and animals is against the animal welfare act.

According to vets, the shocks from collars are damaging to the health of animals, and this is not humane to use shocks for dogs and other animals.

What Are the Alternatives to Shock Collars?

Citronella collars are better than shock collars to train a pet. This waterproof collar is more like a spray collar. When the pet shows unwanted behavior, citronella is sprayed on the dog. For every unnecessary action, the citronella is sprayed, so the dog finds its smell offensive. This citronella gives stimulus to the dog each time for not showing unwanted action again. In this way, the dog learns easily.

Pheromones are very helpful for training a dog. A dog’s olfactory power is very effective. Synthetic pheromones are sprayed on the dog when he shows needless behavior. The smell of pheromones acts as a brain clicker on each spray. So the dog will learn by the use of pheromones easily and efficiently.

Other than giving shocks to dogs or spraying anything, there are whistles he used to teach dogs good behavior and refrain them from bad behaviors. Whistles are used to give a warning tone, making the dog aware of either a mistake done by the dog or harm. You can use whistles in a crowdy place or use whistles to keep your dog in the yard. The dog can easily get a sound stimulus from the whistles, which makes him aware not to show unwanted behavior. Also, the whistle does not cause any harm to the dog. Instead, it just gives a warning signal to the pet.

What are Electric Fences?

This happens very often when you leave your pet in the yard. He crosses the boundary, and you have to go and find him again.

Many people use fences at the boundaries of yards, either small or large, to make the dog stay in the yard.

Also, some people put fences at the boundary to protect the pet by keeping strangers or offensive neighbors and other animals away from the yard who can damage the property too. These fences come in different forms. Some are wooden fences, and others are made up of steel. One form of fence is an electric fence.

An electric fence is a form of fence that generate shocks and inflict the person or animal with it who tries to cross this fence.

Can a Shock Collar Be Used to Keep the Dog in the Yard?

A shock collar can be used to make dogs stay in the yard by putting an electric fence on the boundary. As a result, the dog stays within the range of the house and does not cross the line of the containment system.

These collars are used with signal transmitters fitted in the electric fence. An electric collar is worn around the dog’s neck, which catches signals from the transmitter control. Whenever the dog comes across the fence during his walks, the transmitter control in the fence detects it and sends signals to the dog collar. This collar generates static correction shock, and the dog feels it on the neck. This prevents the dog from jumping over the fence.

What Are the Types of Electric Fences?

Dogs are given dog fence training. In this training, dogs are taught not to leave the yard’s ground. This training is aided by using a fence across the boundary on the ground. The pet can freely move in the yard when trainers properly train them about the dog fence. There are two most commonly used electric fence systems.

In wireless systems, wireless fences are created across the boundary. This boundary is created by putting a transmitter under the ground of the house or yard area. This creates an imaginary boundary in the yard. An electric collar is connected through signals with the transmitter, and the dog wears the collar. In these wireless systems, the dogs are allowed o move here and there but not cross the fence.

In an invisible fence system, the fence wire is buried underground. These invisible fences have a transmission control connected to the collar worn around the dog’s neck.

When the dog tries to come near the yard’s boundary, the transmitter in the underground electric invisible fences transmits signals to the collar. This collar produces a mild electric shock on the skin of the dog.

How Can You Train a Dog Using Electric Fences?

The training method for invisible fence systems and wireless fences is almost the same except for the absence and presence of a physical electric dog fence.

What Are the Pros of Electric Fences?

What Are the Cons of Electric Fences?

Electric shock collars and fences are both used to train the dogs. ShocIn addition, shocklars are used to repress any unnecessary behavior in the dog, such as over barking.

Electric fences are used to protect the dog from running away and train the dog to refrain from crossing the boundary of the yard.