Skip to content
Home > What Countries Have Banned Shock Collars? 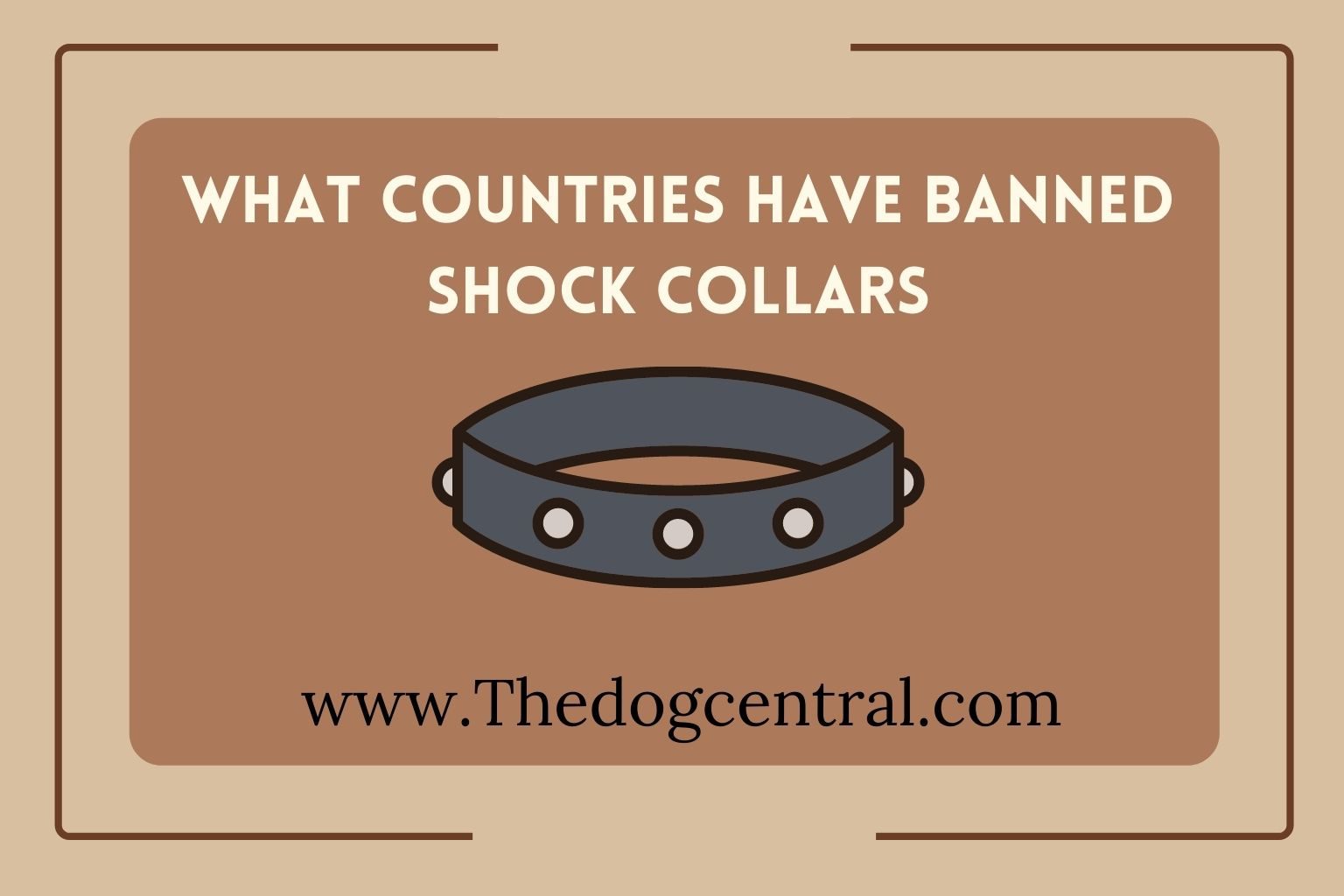 The training of a pet is a very usual thing. Every pet owner wants his pet to be decent, well-behaved, and friendly. These behaviors are taught to these pets or pet dogs through several training sessions.

Trainers use several methods and techniques to train the dogs. In these pieces of training, the trainer works on the behavior of dogs and teaches them to learn good habits and adapt themselves accordingly. Good behaviors that a dog learns are appreciated, which falls in the category of positive reinforcement.

These pieces of training are aided by multiple tools that can be electric or non-electric. These tools can be leashes, clickers, or collars.

Sometimes the excessive and harmful use of these tools imposes threats to the physical and mental life of dogs. In this aspect, many countries have been banned electric tools such as shock collars or prong collars for training a dog.

What Are Shock Collars?

Shock collars are dog training collars used to train dogs. These collars are worn around the dog’s neck. For teaching good behavior to dogs, refraining them from unnecessary and unwanted behavior, shocks are given to dogs.

Pet owners take the remote control in their hands during the training course. When the trainer or owner sees his dog practicing odd behavior, he presses the remote button. This generates an electric shock on the dog’s skin.

After sensing the shock, the dog suddenly stops. After learning from every shock, the dog adapts himself to this behavior. He refrains himself from exhibiting aggressive and unwanted behavior in the future.

Shock collars are mainly and effectively used to train police and hunting dogs. These dogs are made enough trained by the use of electric shocks.

Why Do Dog Owners Use Dog Training Shock Collars?

The trainers always say that they use to train the dogs in their behavior. Dog trainer takes it as a normal practice to give a shock to the dog whenever he sees anything wrong done by the dog.

By keenly observing this, we can say that electric shock collars are used to give punishments to innocent and naive dogs.

e collars are used basically and essentially by police to train police dogs. As we know, police dogs are trained enough to serve; all these abilities are given after strict training through these e collars.

To train hunting dogs, the use of shock collars is normal.

Electronic collars are mainly used to repress the unnecessary barking of dogs. Shock collars work when the dog barks, giving electric shock at each bark.

Vets never recommend using training collars for the dogs that give an electric shock. They state that these prong collars and e collars might be damaging. The collar affects the skin of the dog when worn too tightly.

When vets encounter any dog illness cases during the dog’s training course, more often, the cause is always the use of shock collars. So the vets suggest positive training methods, especially for the pets.

What Is the Negative Impact of Shock Collars on the Dog?

Shock collars are used to train hunting dogs. Even for hunting dogs, the intensity of the shock is adjusted before using the collar. The shock frequency is also managed to keep its use at a safe level.

The overuse of shock collars is damaging. It affects the physical and mental health of dogs.

What Is the Difference Between Shock Collars and Prong Collars?

Both the shock collars and prong collars lie in the category of training collars. Both are used to modify dogs’ behavior and repress some unwanted moods in them. In case to stop the dog from barking, any of these collars can be used. But there is a difference between the structure and functioning of both collars. Let’s separately see the difference between both anti-bark collars.

These training collars are used to train the dogs by negative reinforcement. When the owner or trainer sees the dog showing some unexpected bad behavior, they inflict the dog with shock by electric shock collars or by pulling the prong collar, so nails hit the dog’s skin.

Do Electronic Collars Harm the Dogs?

Electronic shock collars, if used unchecked, lead to severe dog injuries. In addition, the dog can become more aggressive and unfriendly in behavior if his behavior is negatively reinforced.

Electric shock dog collars generate shock to the dog’s skin. If the dog trainer increases the intensity and frequency of shocks, these shocks may rupture the dog’s skin and increase physical pain.

Also, the overuse of electric shock collars lowers the normal functioning of a dog’s nervous system. Sudden shocks are welcoming to stress and depression for dogs.

According to many animal welfare organizations, the use of shock collars and any collar to punish dogs is illegal.

Punishing any animal against his natural behavior is wrong. Unfortunately, many trainers and pet owners punish their pets for very small and minor doings. They use e collars as training collars and give the pets severe shocks.

Where Are Shock Collars Illegal?

Many states of the world have made shock collars and e collars illegal. In addition, the countries such as Denmark, Norway, Sweden, Austria, and Canada have implemented a law that does not allow shock collar training.

What Countries Have Banned Shock Collars?

The animal welfare act demands the government ban electric shock collars. Many countries such as Denmark, Norway, Sweden, Austria, Switzerland, Slovenia, Germany, and Canada have done this and illegalized remote-controlled collars in their states.

Are Shock Collars Banned in Australia?

Shock collars have been banned in many states of Australia after considering the damaging effects of these e collars on dogs. In addition, the government of Australia illegalized shock collars that give a painful shock to the dogs, which is against dog welfare.

Are Shock Collars Banned in Canada?

Are Shock Collars Banned in Europe?

Europe has strictly banned e collars, spray collars, or any shock collars. The anti-bark collars appeared to be appealing to dogs’ more fearful or aggressive behavior.

The local animal welfare organizations in Europe and animal activists have been working to make the community aware of the harms of shock collars during obedience training of dogs.

What Are the Alternatives to Electronic Training Collars?

Shock collars cause harm to the dogs. It is observed through studies that dogs or any other pet learn more when appreciated for good behavior other than punishing them over bad behavior.

There are so many methods used for training the dogs instead of using shock collars for training. Let’s discuss these methods one by one.

Behavioral training is long-term beneficial learning for the dogs. This training teaches the dog lessons about sitting, standing, carrying a thing, coming, lying down, or standing. These pieces of training are actual reward-based pieces of training. Reward-based training details strengthen the dog’s learning capability and provoke him to adopt positive behaviors for his whole life.

Behavioral pieces of training are better than training the dogs by using a shock collar.

Whistles are extensively used for dog pieces of training. This is because the listening power of dogs is much higher than that of humans. Dogs can learn and adapt to so many sounds efficiently; for this reason, trainers mare the dogs to get used to whistles.

Trainers use these whistles to appreciate the dogs for completing the command or to grab the dog’s attention. Dogs quickly learn this behavior and respond to the situation efficiently and accordingly.

An excellent alternative to electronic shock collars is spray bark collars. These collars spray a liquid or water on the dog when he shows ill behavior. The fall of liquid at each expression of unhealthy behavior warns the dog from avoiding that behavior.

The most commonly used spray bark collar is the Citronella spray collar. Citronella is sprayed on the dog to stop his unnecessary barking on every bark.

Citronella spray collars are much better than electric shock collars. These collars relieve the dogs from severe punishments inflicted on them through shock collars or training prong collars.

These training collars can damage the physical and mental health of the pet dogs. When the shocks are given more than enough, these impose stress on dogs’ cardiac and nervous tissues. Ultimately the dogs become susceptible to depression, stress, and illness.

Many countries, after throwing light on this issue, reached a solution. This solution was to illegalize all the electric and prong collars used in pet dog training. These countries have implemented the animal welfare act and have banned the use of these collars strictly.

These countries include Denmark, Norway, Sweden, and Austria.