Home > Puppy Learning Bad Habits From Older Dog? Here’s What To Do

One facet of puppy learning that often seems to get overlooked has to do with dogs modeling their habits on the behaviors that they observe in other dogs.

We have all heard the axiom: “The older the wiser.”

Just as with older siblings teaching the younger one’s habits, both good and bad, so too do dogs. From puppyhood, dogs desire to be with other dogs; to follow their lead and copy their actions.

So if you currently have an older dog and are introducing a new puppy, much can be learned from the elder dog.

Puppies show tendencies to imitate the behaviors of others from an early age and this continues throughout their lives.

This is known as allelomimetic behavior (mimicking), wherein each animal does the same thing as those close. This behavior shapes the learning patterns of dogs, especially during puppyhood.

It is a well-known fact that dogs watch the actions of other dogs and try to obtain useful information from their observations.

Dogs will often model the behaviors of other dogs when there seems to be a benefit to be gained.

Can dogs learn bad behavior from each other?

Time after time you see how dogs teach each other.

Sometimes good things, sometimes not so good, but they do watch and learn from each other. Know that when you have multiple dogs in a home, there will always be a pecking order.

Dogs, unlike humans, look at life differently, they communicate differently than we do, and their associations are different.

They can’t change how they view things so it’s up to us to adjust and look at situations from their perspective.

Let’s cover some of the major
ways dogs learn bad behavior from each other.

A lot of dogs get a bit possessive about their food, which is something that needs to be nipped in the bud.

If you share your home with two or more dogs, food guarding can make mealtimes a real nightmare.

The more possessive dog will soon teach the others to act in the same way which could end up in a nasty fight.

Any sort of disruptive behavior like possessiveness can quickly be picked up and copied by other dogs in the household, which is why it’s important to prevent this type of behavior from escalating.

The best way of doing this is to reward a dog when they react passively when they would normally be a little too possessive about something.

Most dogs instinctively guard what they perceive to be their territories.

This could be the house, garden or a fenced off the area they regularly spend time in, although some dogs get very territorial when they are in the park, too.

If there are two dogs in the household, one of them might be more territorial than the other, but the chances are that dog number two will bark and run to a gate or fence when anyone approaches, simply because they are copying the more territorial character.

On their own, they may not even bother barking. It can be a dilemma because most owners like it when their dogs let them know when someone is at the gate or the door, but when this becomes an obsession that a second dog starts copying, it becomes a real issue.

Dogs quickly learn to be anxious if they see one of their companions scared by something.

The new dog will soon begin to react nervously to a situation, which means you could end up with two dogs being stressed out at the same time, making it much harder to cope with them both.

You should never force a dog to do anything if they show any anxiety, but rather coax them gently at their own pace and hopefully, their less anxious companion will help them overcome their fears rather than the other way round.

Can dogs train each other?

Dogs observe what other dogs do and learn by watching.

If one dog gets away with bad behavior, other dogs in the household may follow the example. To dogs, it’s not bad if their behavior isn’t corrected.

If a dog’s behavior changes, that’s cause for concern because it could be due to a medical issue or behavioral problems like separation anxiety and food aggression.

However, a dog that is copying bad behavior is a completely different situation. It’s important to be able to tell the difference between bad behavior and an actual behavioral change.

When two or more dogs live together under the same roof, they will generally imitate each other.

If one dog is a little more disruptive than the other, the more docile dog may begin to copy the rambunctious behavior of its companion.

This can be especially true of younger dogs.  Sometimes just the mere presence of another dog in their environment can trigger a change in character.

Dogs are just like us and can pick up bad behavior from each other.

Even if you only have one dog in the house, they can learn unwanted behavior at dog parks, at a friend’s house, or even at a kennel while you’re away on vacation.

Fortunately, all of the above can be corrected with consistent training to stop unwanted behavior and encourage acceptable behaviors, before your pup becomes too much to handle.

While their ability to learn from each other is quite remarkable, dogs not only learn by copying, they also have the ability for “selective imitation.”

This means canines don’t just possess the ability to copy other dogs’ actions but to selectively copy, based on the circumstances.

In other words, dogs only mimic each other’s behavior when they think it’s the most efficient way to get something done, or if it appears to be “acceptable” behavior.

Does having an older dog help train a new puppy?

Many dog owners have learned that bringing a puppy into a house that already has a well-trained adult dog, greatly simplifies its training.

The puppy learns to come when called by tagging along with the other dog.

Teaching a puppy to hop into your car on command is simple when you have another dog that responds to the command.

Housebreaking is simplified because the pup will follow along with the adult and will eliminate at the same time and in the same outdoor locations that his companion does.

Young dogs are still learning the ropes and will look to an older canine companion for direction and guidance.

If a dog is naughty by nature and spends time around another dog that misbehaves too, then it can become a real issue.

However, with that said a dog can be quite selective when it comes to mimicking what other dogs do.

Dogs are clever and will only copy behaviors and actions that will have a positive outcome for them.

A great example of this is when one dog sees a companion stealing food from a counter or table.

Although normally very well behaved, the first dog could be tempted to follow suit and steal food, too.

The only real way of preventing a dog from copying the bad behaviors seen in other dogs is to use positive reinforcement for desired behaviors.

Dogs learn far more quickly by observing others than by trying to dissect a task without observation.

Owners of adult dogs are often shocked by how easy training becomes when taking in a new puppy.

The pup comes when called by mimicking and following his adult companion. The new addition watches as the mature dog sits on command, and learns the trick with less training.

Understanding a dog’s ability for selective learning also reveals why they sometimes make choices we don’t approve of.

One example would be the new puppy watching as the established dog opens the cupboard to retrieve a treat for herself, or sees the adult dog run wild as soon as she’s off its leash.

Although a punishment from their human may come later, there are immediate rewards the new puppy experiences first.

Dogs are very clever creatures and they quickly learn things from other dogs in a household, whether it’s good behavior or bad.

However, they can be quite selective with the behaviors they copy and will generally only imitate another dog if they think they are going to get something “good”.

If you share your home with more than one dog, and one of them is a little disruptive, the chances are your other dogs will follow suit, especially if they are young and looking for guidance from an older companion. 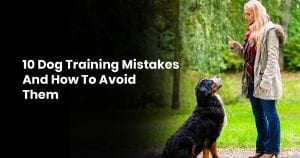 10 Dog Training Mistakes And How To Avoid Them

There’s no question that training your dog can be challenging. Even for professional trainers, some pups are just more challenging 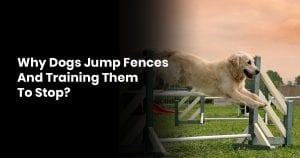 Why Dogs Jump Fences And Training Them To Stop 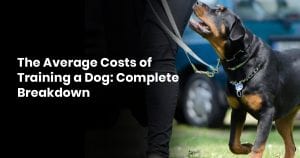 The Average Cost Of Training A Dog: A Complete Breakdown

So, you’ve brought a new dog or puppy into your life. Congratulations! Dogs make such great companions and many of

Chris is a dog lover who takes his passion to the next level, and has always believed that dogs deserve the very best in life. His years of experience as a dog owner and devotee, as well as a keen interest for learning everything he can about our canine friends, means he has a wealth of information to share with others who love their dogs just as much.