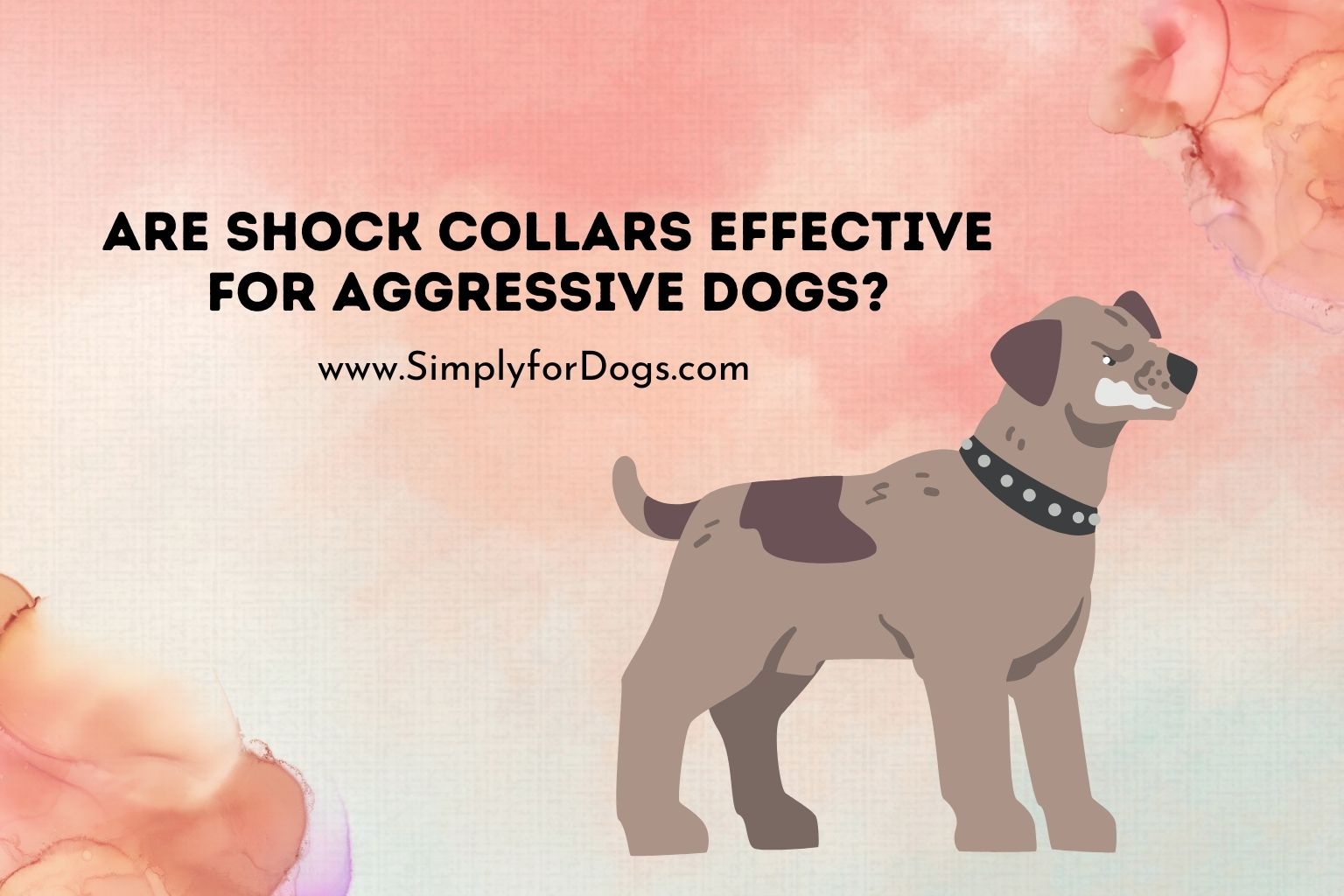 Dog aggression is something that all dog owners want to get rid of. One can definitely get rid of this negative behavior through shock collar training. Here is the complete guide explaining the causes behind the dog’s aggressive behavior, solutions, and tips to avoid it.

Why Do Dogs Get Aggressive?

Pet owners need to identify the cause of aggressive responses in dogs because some aggression issues cannot be treated with shock collar training. The most common types of aggression observed in dogs are the following:

If your dog is a good boy but has suddenly started showing aggressive behavior, you would probably like him to be trained. But before opting for any training method, let your vet examine the dog. He might have an injury or a disease that is causing him pain and thus aggression. There are many reasons for being in pain, including cuts and bruises from an accident or genetic diseases like hip dysplasia.

Once the vet has examined the dog, and the treatment has started, your dog’s behavior will return to normal while enjoying good health. But in case the vet says that the dog’s health is perfectly normal and pain is not the reason behind his aggression, you can train him using a shock collar to drop the aggressive behavior.

How to Help an Aggressive Dog Using a Shock Collar?

If you think you don’t have enough time to train the dog, better contact a professional dog trainer. But if you want to train your aggressive dog by yourself, you can go through the following step-by-step guide:

1-Know How to Use a Shock Collar Properly

First of all, buy the right dog training collar for your pooch. The most effective collar is the shock collar also called the E collar. It is a remote training collar that works from a distance with the help of remote control. When a dog trainer gives the command from the remote, the collar gives a light shock to the dog. Some people question the safety of the collars. However, they are perfectly safe and humane.

Their different training modes are important features to know before using shock collars on aggressive dogs. Most shock collars have 3 modes. One is the beep, one is the vibration, and the other is the shock feature. If you think that the dog will not be able to tolerate the shock directly, go for the beep and vibration mode. But stubborn dogs ignore these signals and hence need to be shocked.

An E collar needs to be fitted around the dog’s neck properly. Ideally, there should be a space of two fingers between the collar and the dog’s neck. It is neither too tight to cause skin irritation and suffocation nor too loose to allow the dog to escape the collar. Similarly, don’t attach a long leash or any leash on the collar. There is the risk of tightening the collar resulting in death. An E collar is an off-leash training tool.

2-Help Your Dog Get Accustomed to It

Now it’s time to make the dog trust the E collars. When he is wearing it for the first time, he must not have a bad experience. To avoid any kind of bad experience, turn off the collar before putting it on the dog’s neck. If the collar is turned on, you or your dog himself can mistakenly press the button on the remote. It gives the dog an unnecessary shock. Getting a shock while he was not ready for it can make the dog anxious and afraid of the shock collar. An aggressive dog can turn more aggressive in such a condition. So, put the collar on your dog very carefully.

Finally, you can start E collar training to get rid of aggressive behavior in your dog. Know your dog’s pain tolerance. The shock that the dog collar provides can be increased and decreased by the varying intensity levels. Make the dog wear the collar with the lowest intensity level. Now increase it gradually and with each increase, give the dog a shock and see if the dog responds. If he does, there is no need to increase the intensity, but if he does not respond, increase the stimulation intensity a bit.

Now keep the collar on the dog when he is most likely to get aggressive and press the command as soon as he starts getting aggressive. The shock will divert the dog’s attention from the cause of aggression. Besides using the dog training collar, you also need to make the dog learn some basic obedience commands. It is because giving the dog voice commands when he seems to be aggressive can help. For example, call your dog to come to you if he is showing signs of aggression and you are afraid that he might start a fight with another dog. But for this, the dog must know the obedience command “come.” Other commands like sit and no can also help.

A positive reward system always brings the best in your dog. He does not want a trophy or a medal; all he wants is a tasty treat or a toy to start giving a positive response. Training and activities that are highly rewarding encourage the dogs to do more.

Anything positive encourages the dog, including a pat and praise. You don’t have to speak long sentences to encourage the dog. “Good dog” and “Good job” are enough. Dogs don’t understand what you are saying; your tone makes them understand whether you are praising or scolding them. So try to keep the tone soft and pleasant.

Benefits of Using a Shock Collar on an Aggressive Dog

Training aggressive dogs with shock collars bring some side benefits. Some of them include the following:

Can Dog Aggression Be Avoided?

It is a famous quote that prevention is better than cure. It can also be applied in this case. If one helps the dog avoid aggression, hiring dog trainers would be no need.

Keep the dog’s behavior in check. When something triggers the dog, it starts barking. As barking is normal, it alone cannot be taken as a sign of aggression. It should also include other signs like growling and snarling. In case the trigger of aggression is right in front of him, he lunges (move forward while barking as if to attack the person or the thing). Sometimes, he acts like he is on the verge of biting. We call this sign snapping. It is a final warning before biting. If the trigger does not go away, finally, the dog will start biting.

Working on Their Socialization

Socializing the dogs with other dogs, humans, and animals from other species can help them avoid aggression. It is because the dogs who are more social tend to be happier and have better mental health. They enjoy their life better than other dogs. They can easily fight fears and anxieties and have nothing to worry about. It is better to socialize the dogs at a young age. Puppies tend to memorize things better than adult dogs. But it does not mean an adult dog cannot be socialized. Contact a professional trainer for this type of dog training, as they know better. For instance, socializing two dogs who are shy can bring better results than socializing a shy dog with an outgoing one.

In some cases, the shock collars can have a negative effect on a dog’s aggressive behavior. Though the static shock does not hurt, it is unpleasant. In addition, when the dog is extremely frustrated, the shock serves as the fuel to fire. In such a case, the dog becomes difficult to control and might even hurt his owner.

Moreover, there are two types of shock on the remote control. One is continuous, and the other is momentary. The continuous shock lasts till the trainer has pressed the button, while momentary shock only lasts for seconds no matter how long the button was pressed. The former type of shock can make the dog more aggressive compared to the latter.

Which Dog Breeds Are More Likely to Get Aggressive?

Though each dog has an individual personality, the breed also has a great impact. Dogs belonging to the following breeds are more aggressive than others:

Aggression is a common issue in many dogs. There can be different reasons behind it. It would be better to take the aggressive dog to a vet, as sometimes sickness is also the reason behind this aggression. You can train him to drop the negative behavior if he is healthy. Aggressive dogs can be trained using shock collars. You can easily control dogs’ behavior from a distance. Instead of hiring a trainer, you can train the dogs by yourself if you know the right use of the collars.